“If I had a world of my own, everything would be nonsense.” ― Lewis Carroll, Alice Adventures in Wonderland

Putting together a project like this from scratch without any previous experience has the potential for creating nonsense. but can my day job as a video producer contain any transferable skills that would help in creating an episodic adventure? Can television writing techniques be used to create an adventure? Can an episodic adventure series be treated in any way like a television show to movie? There are certain aspects of modern serial storytelling that I think can help in the creation of my adventure series.

"The Future of Storytelling" MOOC by the University of Applied Sciences Potsdam (FH Potsdam) provides a good basic education on the topic. The modern television series employs two types of story writing, procedural and serial drama. A serial drama continues from week to week usually developing a main story arc, whereas a procedural drama usually take the "case-of-the-week" format, or in our case "quest-of-the-week." For this project I will use a mix of both, each adventure should contain—a "seasonal" story arc as well as weekly episodic story arcs, or quests.
There are plenty of prewritten campaigns and adventures that I think come close such as Pathfinder Adventure Paths, Savage Worlds' Plot Point Campaigns, as well as organized play campaigns like WotC's Encounters and Paizo's Pathfinder Society. There are bits and pieces of each that I like but none of them are an exact fit. The Adventure Paths and Plot Point Campaigns seem to be too reliant on the main story arc. I played in a couple of seasons of Encounters and while it meets my time requirement it too seemed to "railroad" the story while merely moving from one encounter to the next week to week. I'm looking to create something a bit more robust. A big story that happens around a small series of individual weekly stories.  In a conversation with +Johnn Four of Roleplayingtips.com recently, he suggested several ideas for the design of the adventures, "I'm thinking Radio Serials of the '30s meet Adventure Path meet Hexcrawl...Each hex has at least a couple five room dungeons, notable NPCs, a settlement, etc….GMs create their own worlds with [the] hexes, a little like Settlers of Catan."

Radio serials of the 30's - check that was one that was already in the works.

Adventure path - yep got that too; maybe a bit of inspiration from both pathfinder and Dungeons & Dragons organized play.

Hexcrawl... uh... uh.. Hexcrawl! Until then I hadn't considered using a hexcrawl as the platform for my adventure. Johnn's suggestion to treat each hex as a container for an episodic adventure module was brilliant! By keeping each module to one hex, I can meet my goal of keeping the world small. I can create 5 story locations, or situations, each based on the 5 room dungeon principle and 5 goal oriented NPCs to start. By creating situations instead of story plots I can allow the story to develop after the dice are rolled. This is a concept that has worked well in mega dungeons like Barrowmaze which play well as a collection of situations.

I will treat each encounter as a situation. The Characters will tell the story by how they react to the situation. Random encounters will also be random situations—don't waste them. It might be a good idea to prepare "random" encounters ahead of time. These should also move along the plot or help with the setting or mood. By creating situations and not plot ponts I hope to achieve a more sandbox feel. The story will have a vague outline but the thick of the the plot shouldn't happen until after the dice have been rolled. Playing through the adventure will be more like playing jazz as group.
Situations will be time sensitive and living. If the characters arrive too late or too soon the situation should be appropriately changed. Time never stands still. I will give suggestions and random tables with possibilities for each situation. The world and adventures should be more like locations and an amusement park not so much the sandbox. So each location should be a unique attraction in the world; a roller coaster here, a haunted house there, etc.

Now its time to get to work! 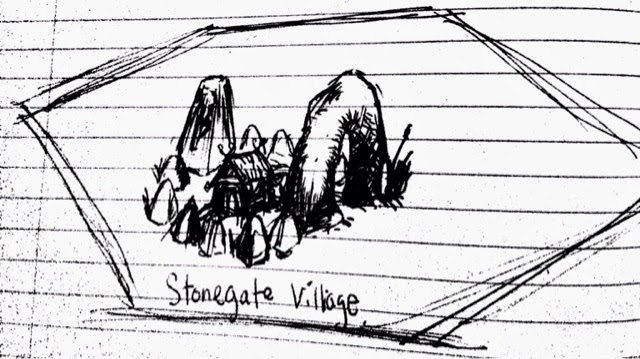 “Now, right here, I am about to utter what may sound like blasphemy to those ears of yours which drank in too much in those theology lectures of long ago, when you were just a plastic and impressionable boy. If I can do these things—if I can reduce and range the same elements so they'll again be organism to its components and then rear-instinct with life, will I not be God myself?” —H.G. Wells, The Island of Dr. Moreau

One of my on-going tasks is reading from Appendix N and similar fiction. My first stop the golden age of pulp magazines; the wellspring of Appendix N. After all, pulp magazines were where many of my favorite authors from Apendix N started; Fritz Leiber, Edgar Rice Burroughs, Robert E. Howard, H. P. Lovecraft and the list goes on. A quick search tuned up more pulp than fresh squeezed orange juice. It was like finding the dragons horde. The first pulp magazine I read was from the Internet Archive: Amazing Stories Volume 1, Issue 7, January 1929. The authors in this issue include H.G. Wells and Jules Verne—this adventure is turning into a history lesson as well; I had no idea their stories originally appeared in pulps.

As I began reading though such pulp magazines as Amazing Stories, Weird Tales, Astounding Stories of Super Science, and Avon Fantasy Reader, my goal was to glean as much style as possible as well as any possible formulas or techniques and the ever elusive secret of the cliffhanger that would keep readers coming back issue after issue.

One thing that occurred to me while skimming through these pulps was that the pulp format could be used as a possible format for my adventures. What if I created a collection of individual short adventures, but all of them taking place in the same local setting. They could be linked but it would not matter which one you started from, but when one adventure was started it would also begin a series of events in the other adventures. The entire set of adventures would be part of a living world.

This fits in very well with my initial goals:

Which Road Do I Take?

“Alice came to a fork in the road. 'Which road do I take?' she asked.'Where do you want to go?' responded the Cheshire Cat.'I don't know,' Alice answered.'Then,' said the Cat, 'it doesn't matter.” ― Lewis Carroll, Alice in Wonderland


I already have many different roads to choose, but because I enjoy so many different systems, choosing a system to write for may be one of the hardest decisions I have to make. Eventually I will have to answer the question, "Which road do I take?" or better put, "Which system do I write for?" I hope to publish my final adventure(s) in a zine format or even a pulp format so what system or systems should I keep in mind? I want to try to remain system neutral, but there is also the possibility that I may have to write specifically for one system and/or convert to another. In the case of having to write for a specific system, the easy answer is to write for a retro-clone OSR system such as Swords & Wizardry or Labyrinth Lord, but a more modern take on Appendix N of DCC might be more suitable. System neutral, system specific, or all if the above? Pleasing everyone might only be a pipe dream lost in the smoke of the Caterpillar's hookah, but it would be better to be prepared rather than to go chasing rabbits.

Perhaps the real question is how long can I keep up the Alice In Wonderland metaphor?