Free Map Friday - The Hanging City of the Night Below 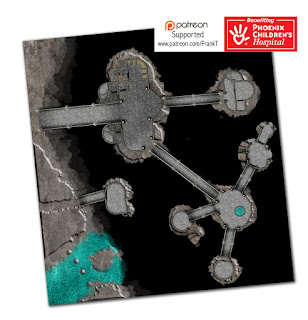 Beneath the surface of the world lies a city hanging from an enormous cavern. Stone bridges arc across the darkness connecting rooms carved into stalactites. There is a legend that this city of the Shadow Dwarves is guarded by a giant stone golem standing watch at the only entrance to the city.
That's just one story, what's yours?

I hope you find a place for this map in your game; and when you do, drop me a line or tag me in a post to let me know how it worked out.

You can download a copy here from my Patreon site.
Posted by Frank T at 3:42 PM No comments:

Hanging Cities of The Night Below

I'm still rather new to the Underdark (I was always a Grayhawk fan) and recently a Patreon patron requested a map of a very particular part of the Underdark—Dunspeirrin, The City of Sunken Spires. For those of you like me who don't know anything about Dunspeirrin, it was a Duergar city built into stalactites hanging over an enormous pit. 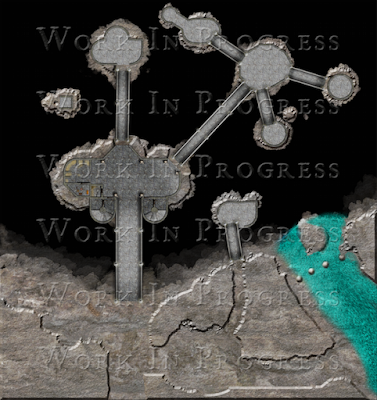 Originally I wanted to present just one of the rooms and a bridge for Free Map Friday, but as it always happens, inspiration strikes and the map began to grow. While there will be more levels to come, I decided to first explore how a city such as this would operate. This city is fed my an underground river and highway system and the only way in or out of the city is through a single bridge that connects the edge of the cavern to a main gatehouse of sorts.

It's still a work in progress, but I should have level one done for this Friday.

Let me know what you think. Have you played in this environment before? How did it go?
Posted by Frank T at 2:41 PM No comments: 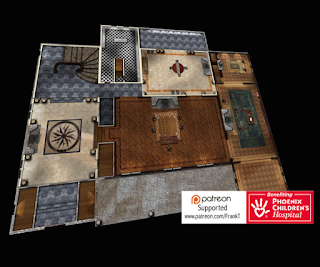 This week's map is massive—as a mansion should be. I must admit this one put me a little out of my comfort zone. I wanted to add a lot of little details and working at such a large scale really taxed my CPU. The first floor of Graystone Manor has taken approximately 30 hours to complete and I still have a few more small additions in store for my Patreon patrons. I tried to keep it fairly genre/period neutral, but was completely inspired by actual mansions of the 1920's. This could be a fraternity house, the secret headquarters for a well known super hero team, the home of a wealthy noble, or the mysterious home of a mad scientist. What will this mansion be for you? I hope you find a place for this map in your game; and when you do, drop me a line or tag me in a post to let me know how it worked out.

You can download a copy here from my Patreon site.
Posted by Frank T at 7:11 AM No comments: 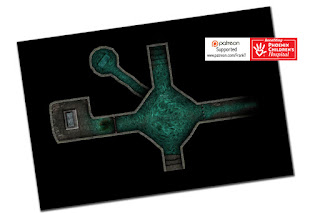 This week I had an itch to work on some water features, so I present the Sunken Mounds of the Secret Goddess. This map began as an experiment in random dungeon creation. I started with the tables in Barrowmaze Complete and used the Location tables from The Tome of Adventure Design. These were a mix of random rolls and inspiration.  Since I'm running a Barrowmaze campaign at home, I plan to fill this out using the Barrowmaze Complete tables for my game—Let me know how you use this encounter area.

You can get it at my Patreon page right over here.