In the game, we need some way of describing your character, the fighter you will pretend to be. We can say the fighter is "strong, fairly nimble, not too smart"— but we need to describe the character a little better than that. We call these descriptions abilities.

The Basic version of the game that I am mostly drawing inspiration from calls these character defining traits abilities. Since Savage Dungeons is a designed for use with Savage Worlds we can refer to these defining traits as attributes.

Yes I am aware of the rules as written, but since Savage Dungeons has grown out of my home game which includes children ages 5, 8,10, 22, and "older than 22", I am experimenting with how minimal things can get and still work with Savage Worlds rules as written—remember the monster stat block experiment?  (I've been able to run a game quite well using only one die type to represent all attributes and skills for monsters.) 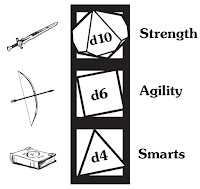 The basic set of attributes for Savage Dungeons are Strength, Agility, and Smarts. While they are broad categories that cover many different but related aspects of a character,  having only three makes it as easy for young players and extremely new players to keep track of what die they need to roll for a given task.

Strength defines how strong and durable your character is. The attributes of Strength and Vigor are both folded into the Strength attribute. Strength relates to physical actions such as forcing doors, fighting with melee weapons, physical endurance and resisting disease. Strength is the primary attribute for Fighter and Dwarf archetypes.

Agility describes how fast and physically coordinated your character is. Agility is quickness, movement, dexterity, and reflexes. Agility relates to actions such as dodging attacks, sneaking around quietly, picking locks, throwing objects, and shooting weapons. Agility is the primary attribute for the Thief and Halfling archetypes.

Smarts determines how smart, knowledgeable, and likable your character is. This attribute includes both Smarts and Spirit. Smarts relates to solving puzzles, remembering facts, telling convincing lies, using Magic and mental resistance. Smarts is the primary attribute for the Magic-user, Cleric, and Elf archetypes.

Since Savage Dungeons is trying to maintain the feel and flavor of the basic version of the original fantasy RPG, all the archetypes have fixed stats at the start of the game. So far this approach has worked well especially for players coming from a traditional F20 RPG background where the d20 does most of the rolling for attacks and skill checks and the concept of potentially rolling a different die type for each action can be as difficult to grasp as the classical dynamics of spinning tops.

What's your thoughts on this minimalist take on Savage Worlds attributes?