I don't normally participate in these internet challenges, mostly because I'm not good at it. I usually fizzle out within a day or two, or I skip a bunch of days and then come back to it [or] eventually just forget about it. I've accepted the Mad Map March challenge, which is creating a different map each day in March, working from a list of prompts. I think this is going to be a very difficult challenge for me.

The first major obstacle in this challenge is going to be the time involved. Because normally I do my map work at lunchtime and generally speaking, it takes about a week of lunches for me to design just one map, and some of that is due to just the process of coming up with the idea or playing with techniques, but in general it takes about five hours or more, sometimes more, to develop a map and because I don't just I'm not just creating a map for use as a key to an adventure, in most cases it's a battle map of some kind and I really enjoy putting a lot of detail—almost telling a story with the map itself. I feel like the map is as much an illustration for the adventure as drawings would be or or painting for a cover and I try to put as much energy into each map as I would an illustration so that that's going to be an obstacle, that's going to be a big obstacle. Working in one fourth or one fifth, the amount of time and trying to come up with a new map every day and completing that map in about an hour is it's going to be a significant challenge.

The other challenge is probably going to be the open ended nature of the prompt. I tend to work a whole lot better when I have more constraints. I play a better character when I have more constraints. I prefer to be given a pre generated character so that I could work within the constraints of what was given to me. Even though a prompt itself has some amount of limits, it's still very open ended. There isn't a lot of description to go on. For instance, day five. Today's prompt was Sea or Lake, "Well, what do you what do you mean 'Sea and Lake'? What are the what are the other rules that govern this creation?" There aren't any [specifics], just whatever your imagination comes up with. Well, hopefully what I come up with is something that everybody likes. Because the other part of this is I want to create something that's useful. I don't just want to create a map for the sake of creating a map or art for the sake of creating art. And because these really are designed to be played on as battle maps, or in virtual table tops, I want people to want to use them in their adventures.

Those are some challenges that I'm going to have to deal with, everything from just my own enthusiasm for the challenge to the time involved, and the level of perfection that I'm going to want versus the level of perfection that I'm going to be able to produce. Hopefully I'm going to learn some new shortcuts and really start to develop some interesting techniques throughout this process as well. really exercise my imagination and and get some new ideas that I didn't have before out and started I Also really hope that I am able to produce quality work that all of my supporters at Patreon are happy with. I care about what my supporters want and so that's important to me. Feedback on this is going to be paramount to my success even beyond completing the challenge.

If you see my work and you like my work, let me know, call in [to Anchor] or write me all of the contact information is in the show notes. Check that out and let me know what you think. Today [is] day five, [I'm] a little behind, I've got four days to catch up on and what I don't catch up on in this month I'm going to just continue on into April to make sure that I can complete the challenge. Let me know what you think?


All Patreon supporters this month get the hi-res watermark free files of all the Mad Map March maps!

The printable tiles were designed to be used as print and play or as a complement to the 2.5D tile creation method created by DM Scotty.

Also included are a full set of files for Virtual Tabletops.


Let me know how you use it!


Be sure to check out our other printable and VTT kits and adventures. 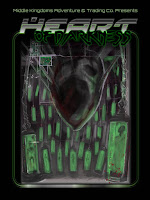