Savage Dungeons: Goblins and Kobolds and Bugbears, oh my! 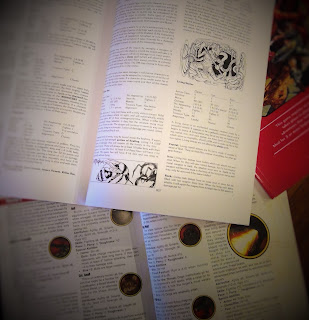 The Basic red box for me was not just about ease of learning how to play the game, but also ease of GMing a game. I want to add that same notion to Savage Dungeons. Like the Quickdraw characters and possibly choose-your-own adventures for players, I'd like to develop  simple paint-by-number styled adventures for beginning GMs.  I am playing with how to present monster stats simply but still remain Savage. Looking at the stat block for monsters in the Basic F20 adventure, there is still a lot of information presented that didn't come up often in a typical dungeon crawl or encounter. After reading the article Instant NPCs for Fifth Edition D&D by +Mike Shea, in which he refers to a blog post Monte Says: PCs versus NPCs in which +Monte Cook talks about simplifying NPC (and creature) details. Monte goes on to talk about how the Cypher system makes it easy to create NPCs and monsters on the fly. In the Cypher system NPCs are represented by one number that is essentially their level of difficulty. In early F20 games this difficulty was represented by the Hit Die as well as treasure type and PC experience point value--Risk vs. reward. In his article Mike concludes that for Fifth Edition D&D, "We likely can't design a system as simple the one in the Cypher system for combatant NPCs. Monsters in D&D have quite a bit of crunch to them with their six attributes, hit points, armor classes, attack scores and the like.", but what about Savage Worlds?looks at NPC creation through the lens of the Cypher System, I began to wonder if Extras in Savage Worlds could be reduced to just a few stats?  How much information is actually needed for a typical combat or non-combat encounter? Since Savage Worlds already makes a distinction between Wildcard and Extra NPCs half the work of simplification is already done, but can we get even simpler? Can we design a "Quickdraw" Extra?

Starting with the most common of fantasy monsters, I created my Basic version of the Savage Worlds Goblin: 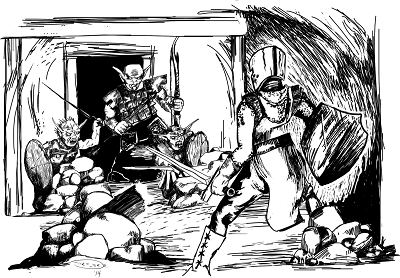 For the most part the average goblin's role in a typical dungeon setting tend to be fighting, creating mischief, and draining the PC Wildcard's resources. with that in mind, the most useful information about goblin Extras is their Fighting (d4) and Throwing (d4) Skill, Parry (4), weapon damage (Str+d4), and Infravision. Aside from Infravision, all the base difficulty of a goblin extra is 4 or d4. A Wildcard Extra stat block in Savage Dungeons might look something like this: Goblins (d4, Parry 4, Toughness: 4, Damage: 2d4,  Morale d4, No. Appearing 1+1 per Wildcard, Special: Infravision)

To check the numbers I ran some simulations on +Richard Woolcock's Build Comparison and Savage Worlds Battle Simulator which are fantastic resources. Compared to his Goblin stats the d4 goblin is slightly less intimidating, but in numbers will definitely keep a party of novice wildcards on their toes.

I'd love to get some feedback on this concept. Do you think its a viable solution to rate Extras based on a single die type?